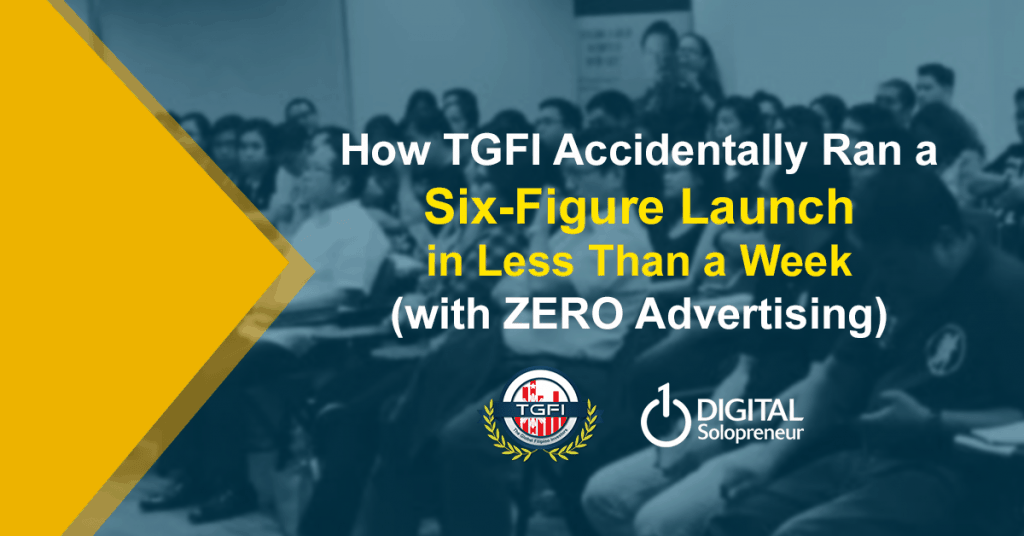 Listen to "How TGFI Accidentally Ran a Six-Figure Launch in Less Than A Week" here:

It was a busy Thursday evening.

I had just wrapped up my Facebook Live interview with Floi Wycoco of The Global Filipino Investors about blog monetization. It was very well-received.

But what we discussed when the camera stopped rolling “accidentally” became the juiciest part of the night.

The Black Friday shopping spree was just around the corner.

TGFI already had a promo in place. We talked about a specific strategy they could test (as I’ve seen it work for me).  It won’t cost them any additional expense, won’t take any more man hours than they were already putting in and they can do it in just a couple of hours.

As I was on my way home, they hurriedly went back to the office to make it happen.

Less than a week later, they had easily 4x their sales in 1/3 the time with ZERO advertising expense.

Listen to the interview on how they did it.

Can I help you?

Do you have any questions about this interview that I can help you with? Put them in the comments section below. I’ll do my best to answer them.

About the Author Allan

Allan is the founder of Digital Solopreneur. He believes that everyone can self-generate revenue by providing a positive impact through ethical email marketing. He runs an exclusive training program for serious email marketers. Click here to learn more

One to Many – How to Use Webinars to Establish Instant Authority, Create Rabid Fans and Explode Sales with Joel Erway

How I Charge Premium Clients $2,000 and up By Simply Asking Questions by Ann Irza

PASSIVE DOMINATION: How I Grew My Email Open Rate From 20% to 70% in a Crowded Market Without Changing a Word of Copy

Please log in again. The login page will open in a new tab. After logging in you can close it and return to this page.

Any cookies that may not be particularly necessary for the website to function and is used specifically to collect user personal data via analytics, ads, other embedded contents are termed as non-necessary cookies. It is mandatory to procure user consent prior to running these cookies on your website.

Run a One-Person Online Business That Gets You Paid

Want to know how to create an “after-office” information product business that pays you what you deserve?

Want to know how to create an “after-office” information product business that pays you what you deserve?